Not N7! A Sunday walk in Kings Cross, N1C postcode

Barge on the Canal

Massage on the Canal

Granary Square is a new venue and part of the Kings Cross regeneration in north London.  There is a new postcode: N1C.

There is a new university building belonging to Central St Martins housed in the old granary/warehouse.  There are fountains, food stalls, and events on a daily basis.  A new road leads to Kings Cross station. Behind are further developments: offices, restaurants, flats, a skip garden, play areas.

Sub and I sat in the square drinking coffee and watching the dogs playing in the fountains.

I  have been documenting the Kings Cross area of London for many years. This is Cheney Street as it was in the 1990s and also since the mid 1800s. 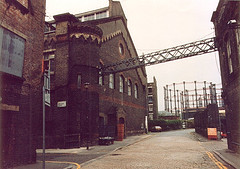 It has been used in many period movies and tv dramas.

The cobbled street is gone now but the Gymnasium remains. I will post some updated photos of this area this week.

Below is a composite photo construction of this area showing the 1842 gas holder, the Cabot Building on the right and the German Gymnasium on the left, along with some street entertainers from the 19th century.  This area used to be called Battlebridge after the battle between the Queen of the Icenis, Boudicea, and the Romans. 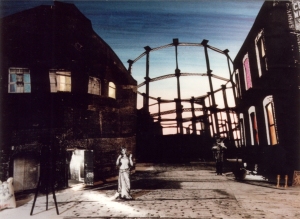 I am a qualified art teacher and English Language tutor. I currently teach English online. I have a degree in art/printmaking and my partner and I go walking around London and the Heath to explore. I am a regular artist and printmaker and also a management committee member of a local housing co-operative
View all posts by Gandha →
Gallery | This entry was posted in Uncategorized and tagged Central St Martins, Granary Square, Grand Union Canal. Bookmark the permalink.